Mr. Richard Chippa of Livonia, Michigan is credited as being the founder and first known official recipient of the Camp Grayling Grand Slam. Sometime in the late 1990’s the conditions at Camp Grayling along with his famous case extractor cleaning rod took its toll and yielded Mr. Chippa a ZERO for the day. Mr. Chippa knew that it would only be a matter of time before someone else would follow his footsteps and also record a zero for a daily match in weekend competition.

On August 11, 2001 during the Michigan State Championship Match, Mr. Richard Chippa’s prayers were answered and his dream came true. Jerry Pond (Wolfman) from Cheboygan Michigan matched his record earning zero score. Mr. Chippa was also the Match Director at the time and came well prepared with a Bronze Zero Medallion on a necklace and was just waiting for the opportunity to present the Zero Medallion to Wolfman, thus starting the Camp Grayling Grand Slam Award. So pictured below is Mr. Richard Chippa (left) the Match Director presenting Mr. Jerry Pond (right) with the Camp Grayling Grand Slam Medallion after posting 10 rock solid misses on all ten chickens, all ten pigs, all ten turkeys, and all ten rams which he righteously obtained by using his famous bag of wandering zeros and constant scope clicking adjustment method to attain the prestigious and coveted award. 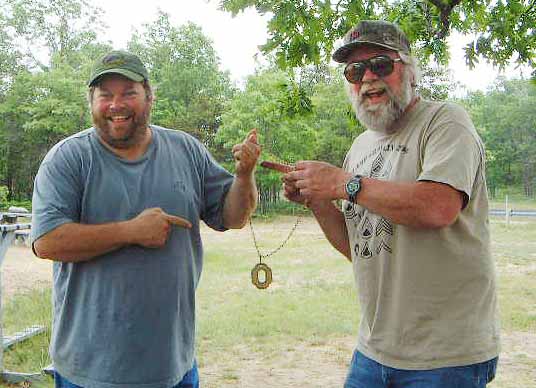 LEFT: Jerry Pond (Wolfman) from Cheboygan, Michigan only had to wait slightly over one year to regain the Bronze Zero Medallion Necklace. On Saturday June 12, 2004 Bruce Langridge from Negaunee, Michigan was more than happy to returned the esteemed trophy back to Wolfman. Wolfman our first repeat winner, once again reached deep into his bag of scope zeros along with some fine coaching from Larry Medler to regain the Zero Medallion. Pictured below is happy Bruce Langridge (left) returning the Camp Grayling Grand Slam Award to Jerry Pond (right). 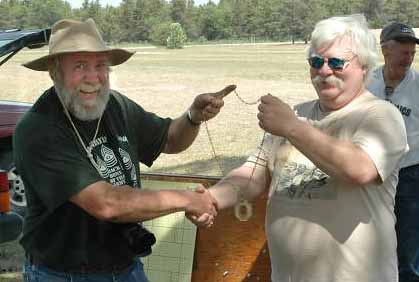 RIGHT: Jerry Pond (Wolfman) from Cheboygan, Michigan only had to wait one month before loosing his prized Medallion. On July 10, 2004 Bob Barnes from Frederic, Michigan was voted into the elite group Michigan Shooters. The Grand Slam Committee had to convene and vote to see if Mr. Barnes was actually eligible under the ground rules of rock solid misses. For Mr. Barnes hit a ram which did not fall, shot one pig in the wrong bay, and on his very last shot turned a chicken ever so slightly. However, the committee decided that Bob could enter the Camp Grayling Grand Slam group who was coached by Larry Medler. Seems to be a trend starting here. On Sunday July 11, 2004 Jerry Pond from Cheboygan Michigan was pleased to present Bob Barnes the Zero Medallion. Pictured at left is Mr. Jerry Pond (left) presenting the Camp Grayling Grand Slam Award to Mr. Bob Barnes.

It seems that the “B” shooters have more fun than the “AAA” shooters!

Send email to Webmaster with questions or comments about this web site.
Revised: 03/28/2011